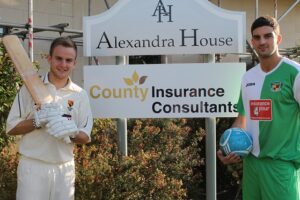 Jonny Kettle (Left) and Mat Bailey (Right) balance work at County Insurance, in the insureTAXI department, with their sporting commitments

insureTAXI, taxi insurance brokers and part of County Insurance Consultants, has not one but TWO  top sportsmen employed as taxi insurance advisors in the insureTAXI department!

Rarely would a company of 65 staff be able to boast both a professional footballer, who has been named man of the match on a televised FA Cup game on ITV1 and a top rising cricketer, who has just been voted player of the year across the entire Cheshire County Premier League scoring over 1000 runs in the process!

Mat Bailey is a taxi insurance advisor and also plays for Evo Stik Premier League team Nantwich Town who are flying high at the moment having won 8 of their last 9 games and are in the FA cup qualifying round 4; only one win away from the FA Cup round 1. Insurance4your, which is the personal insurance brand of County Insurance are also the first team sponsor of Nantwich Town.

Jonny Kettle, also a taxi insurance advisor is the opening batsman and wicket keeper for both Nantwich Cricket Club and Cheshire County 1st X1. He scored over 1000 runs and claimed 53 dismissals, for the best side in Cheshire, Nantwich Cricket Club, winning player of the season across the whole league in the process.

Here is a little more information about them both and why they have had such an impact at County Insurance and the insureTAXI department……and how they see insurance as part of their future careers.

Mat Bailey (25) has been a professional footballer since the age of 16 and has played for Crewe, Stockport and Northwich Victoria at league level as a central defender. The highlight of his career to date was Northwich Victoria’s FA Cup run when he was man of the match in the live ITV1 televised game beating Charlton 1-0.  He also scored a goal in round 2, vs Lincoln City, which was televised live as well.

Mat has taken the sensible decision to plan for his life after football by starting to work for County Insurance as an advisor.  It’s his first ever job. “It’s been a big change for me but one that I’m really enjoying” says Mat. “Adapting to life in an office after being a full-time professional footballer has been an eye opener but the team at County are genuinely brilliant and it’s been much easier than I expected!”

“I’m really enjoying it and for me it’s the best of both worlds at the moment. I am learning an important and long lasting skill being an insurance advisor and hope to complete my Cert CII qualifications.  Taxi insurance is definitely far more interesting than I thought it would be!  At the same time I am still a semi-professional footballer, playing for a great club like Nantwich who have a strong team and experienced manager in Jimmy Quinn”

Nantwich Town are facing one of their biggest games for years on October 29th with a home tie against Nuneaton Town.  The prize for the winner is a place in the FA Cup 1st round. Mat is no stranger to this, having played in both round 1 and round 2; he is hungry for more! It’s no co-incidence that since Mat joined Nantwich they’ve seen an upturn in results, with a recent 8 wins out of 9 games.  Mat’s leadership and defensive skills make the defence an altogether meaner unit.

Mat Bailey on the forthcoming big game says, “I have played against Nuneaton Town a couple of times recently and if we play to our potential we have a really good chance”

Jimmy Quinn, ex Northern Ireland legend and Nantwich Town manager comments “Mat has made a big difference to the club since he joined. He is a professional who has been there and done it, yet is still only 25 so has a lot to give.  He has really strengthened what is now shaping up to be a very good team. He’s a bright lad as well, so I’m not surprised that he is doing well in his second career. It’s the first time one of my star players has also worked for our first team sponsor!!” 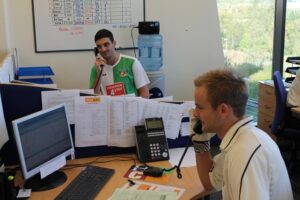 Jonny Kettle (21) has had a fantastic season as opening batsman and wicket keeper for Nantwich Cricket Club and Cheshire 1st X1. Nantwich won the Cheshire County ECB Premier League for the second year in a row and Jonny weighed in with 1070 runs, averaged 66.88 runs and got five 50’s and four centuries – his highest score 150 not out.  He also claimed 53 dismissals – a league record.

Added to this he represented Cheshire in the MCCA Championship and KO competitions, scoring nearly 500 runs and claiming 22 dismissals.

Jonny has been with insureTAXI as a taxi insurance advisor for nearly six months now and is enjoying balancing his job with his cricketing commitments.

“County Insurance are really understanding and allow me to take time off for any 4 or 5 day Championship games” explains Jonny. “The job is very varied and busy, which suits me perfectly as I’m used to a fast pace with my cricket and the two seem to be balancing well.  I really enjoy getting taxi drivers the best deal on their taxi insurance!”.

Dave Clapp, Managing Director of County Insurance, gives his take on the two sportsmen and insurance advisors. “Mat and Jonny have done a great job for us, so we’re pleased to support them in their sporting careers. Both of them have played at a top level and are completely used to the importance of teamwork; you can certainly see this in the office environment. They have integrated into the team perfectly, have upbeat personalities and bring a winning mentality to their roles. They are also both very bright, which has probably aided their sporting development too.”

“It’s impressive as they show full commitment at work, despite the training and matches they play at evenings and weekends, while the rest of us put our feet up!”

So what would happen if a bigger sporting opportunity came along? “I would support Mat or Jonny 100% if they had the opportunity to play at the highest level. They would leave with our best wishes and I would keep the door open for them if they ever wanted to return. I admire them both as they are doing the sensible thing in building a career in a respected industry for after their football and cricketing days.  However, if they get an opportunity to climb the sporting ladder even further I’d be delighted for them”.