YESTERDAY was an exciting day for insureTAXI (providers of great value taxi insurance)!

ITV came to our head office in Crewe to film a news story!

Insurance4your.co.uk, our private car, home and van insurance department are proud sponsors of Nantwich Town Football Club (Evo Stick Premier League) who are impressively through to the first round of the FA Cup!!  One of their top players, Mat Bailey, also works as a taxi insurance advisor for insureTAXI!

In the build up to NTFC’s big game against MK Dons on Saturday (12th November), ITV were interested to know how Mat balances his career at insureTAXI and being a professional footballer.

Mat has taken the sensible decision to plan for his life after football by starting to work for County Insurance (insureTAXI’s parent company) as a taxi insurance advisor.  It’s his first ever job! 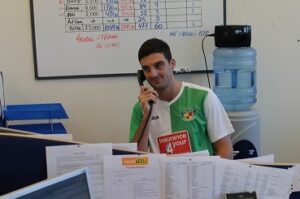 “It’s been a big change for me but one that I’m really enjoying” says Mat. “Adapting to life in an office after being a full-time professional footballer has been an eye opener but the team at insureTAXI are genuinely brilliant and it’s been much easier than I expected!”

“I’m really enjoying it and for me it’s the best of both worlds at the moment.  I am learning an important and long lasting skill being a taxi insurance advisor and hope to complete my Cert CII qualifications.  It’s a varied role and quite fast-paced.  It’s great to get customers the best deal on their taxi insurance.  At the same time I am still a semi-professional footballer, playing for a great club like Nantwich who have a strong team and experienced manager in Jimmy Quinn”

Mat scored one of the goals and was also “Man of the Match” in the game that put NTFC through to the FA Cup first round in their 3-2 victory over Northwich Victoria last week.

Tim Crighton (Left) preparing to give his thoughts on camera!

County Insurance’s Tim Crighton (Director) comments “We are very proud of Mat and the team’s achievement!  We’re looking forward to travelling down to Milton Keynes to watch them play this important match.”

Tim continues with saying “Mat has done a great job for us, so we’re pleased to support him in his sporting career.  As he’s played at a top level, he’s completely used to the importance of teamwork; you can certainly see this in the office environment.  He has integrated into the insureTAXI team perfectly, has an upbeat personality and brings a winning mentality to his role.   He is very bright, which has probably aided his sporting development too.”

So what would happen if a bigger sporting opportunity came along? “We would support Mat 100% if he had the opportunity to play at the highest level.  He would leave with our best wishes and we’d keep the door open for him if he ever wanted to return.  We admire him as he is doing the sensible thing in building a career in a respected industry for after his football days.  However, if he gets an opportunity to climb the sporting ladder even further, we’d be delighted for him”.

The story will be aired at 6pm on Friday (11th November) on ITV Granada.