We asked over a thousand taxi drivers across the country a range of questions. The questions were to collect meaningful taxi driver data – from the average number of fares they take a day to waiting times. However, we also asked some fun questions about celebrity passengers, strange items left behind and your funniest/strangest experience behind the wheel. The results are below!

1)Do you use a public or private hire vehicle? 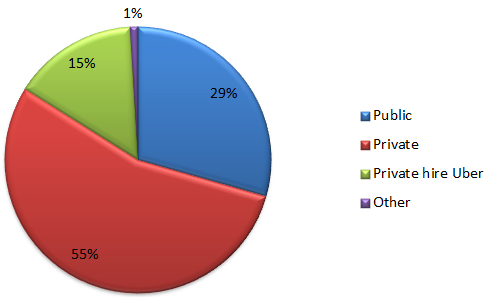 As you can see, over half of our respondents are private hire drivers followed by public hire drivers at 29%. The results have changed a little since our 2013 survey with there now being a proportion of drivers who are Private Hire Uber drivers and a growing ‘Other’ category (incorporating limo drivers, chauffeurs etc).

2. What type of vehicle do you usually drive for your job? 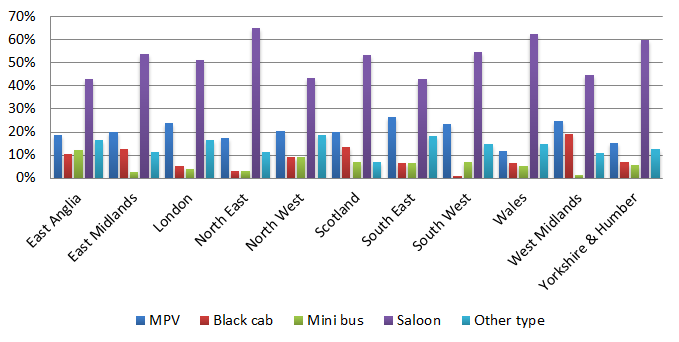 As you can see, across the country a large number of  taxi drivers are driving a Saloon followed by an MPV, The highest number of Saloon taxi drivers being in the North East. From our taxi driver survey in 2013, a Saloon is still the most popular vehicle. There has been an increase in minibus and other type of vehicle in the three years.

3. On average, how many miles do you drive a year? 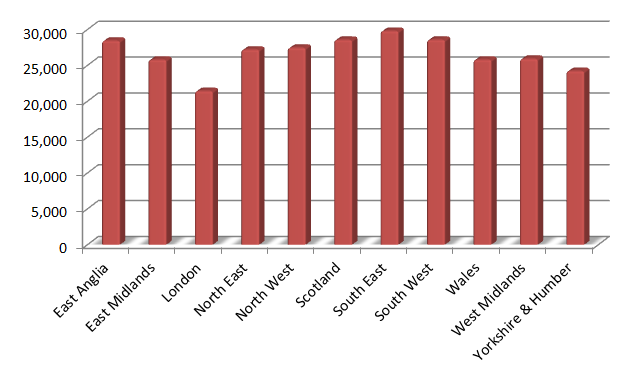 4) On average, how many fares do you take in a week? 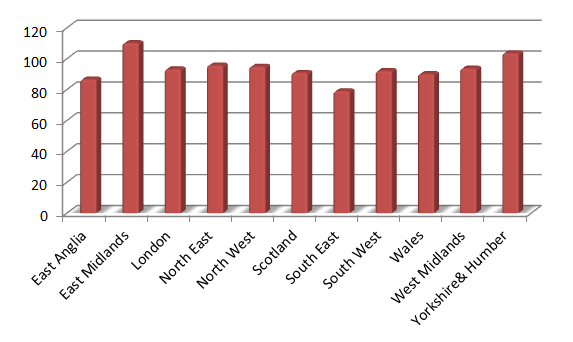 The region taking the smallest amount of fares each week on average is the South East with about 75 and the highest number of fares is the East Midlands with about 110.

This is interesting to look at since the South East are taking the smallest amount of fares throughout the country however they are doing the highest number of miles. Perhaps cabbies in the SOuth East are taking longer trips? If you can think of another reason, get in touch! We’d love to get to the bottom of this interesting statistic (via @insuretaxi on Twitter and Instagram or facebook.com/insuretaxi).

5)On average, how much do you spend on fuel every week? 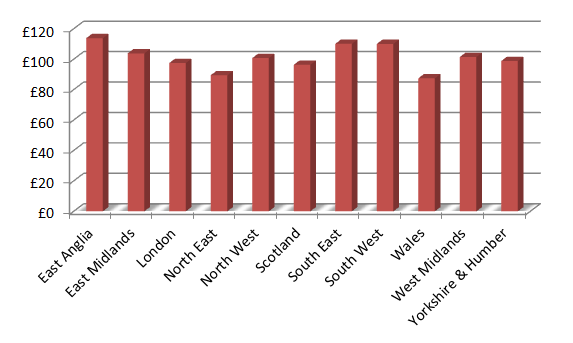 6) On average, how much does your insurance for your taxi cost every year?

At insureTAXI, we were very interested to see how much you are paying for your taxi insurance. We found out from our survey that most drivers are paying between £1000-£4000 on their insurance. The price of your insurance will depend on the number of miles, your location, age and a few more factors.

If you’re looking for taxi insurance, why don’t you contact our expert team? We’ll shop the market on your behalf and find you the lowest quote possible.

7) What’s the average monthly cost of maintaining the vehicle you usually drive for work? 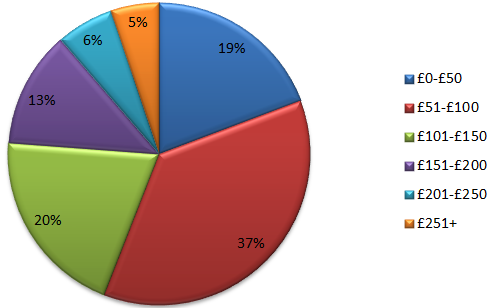 On average, most drivers are spending £50 – £100 to maintain their vehicle each month. With a very small portion of drivers spending over £250 each month. If you’re looking to cut down your costs each month, especially with seasonal shifts coming up and Christmas, read our tips and tricks for the seasonal season.  Hopefully it will keep your vehicle costs down. 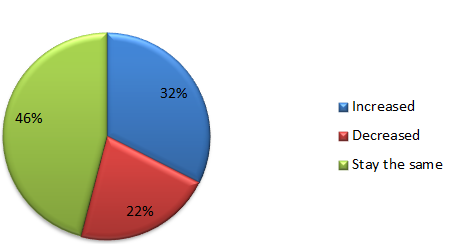 Almost half the taxi drivers we have asked said their working hours haven’t changed since 2013. However, the main reasons why drivers have dropped their hours is because they have decided to work part time, for personal/home reasons or because they’ve changed their jobs (one example is airport runs instead of general taxi-ing).

The 32% whose hours have increased over the last three years is because they have to work longer hours to make the same amount of money as they did before. This is because they have more competition around, with people offering cheaper fares and the growing popularity of Uber over this time.

9) How many hours on average do you work a week? 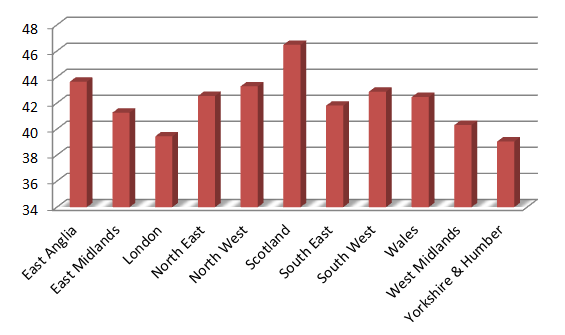 These are going to be incredibly long working days so we take our hates off to you! Well done!

10)Before tax, how much income do you take home per week on average? 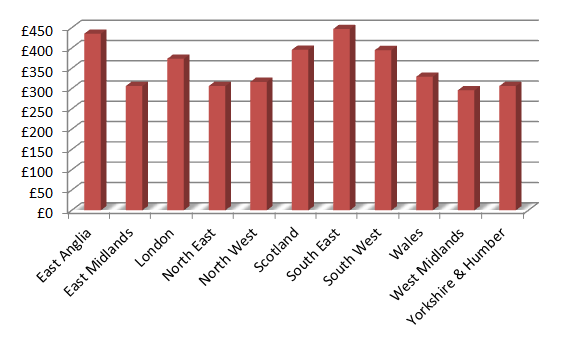 The high earners in the UK is the South East (£440 on average) followed by East Anglia (£430 on average). The lowest earners is the East Midlands bring home £300 every week.That could be down to people use more public transport, or with more taxi drivers choosing to work part time in those areas.

11) How long, on average, do you wait between fares (in minutes)? 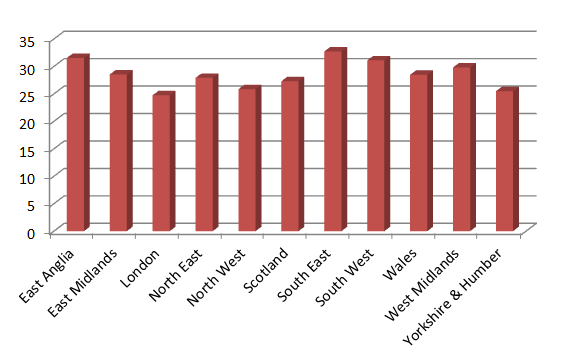 The shortest waiting times between fares is London with a wait of less than 25 minutes. This could be because of the city being highly populated and it being filled with residents, workers and more tourists. South East followed by the South West have the longest wait between fares which are over 30 minutes! Do any of you Southern drivers have a theory as to why that is?

12) What are you most likely to be doing when waiting for a fare? 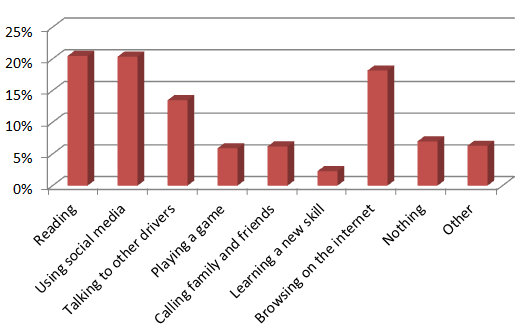 The main three past times we found from our survey were reading, social media and browsing the internet. If you’re browsing in between pick-ups, make sure you keep up to date with our blogs which are filled with great tips and advice and the latest taxi news – go to our blogs.

Our recent brainteaser has taken over the nation! So far, it’s appeared on the Telegraph, Yahoo, Daily express, Birmingham Post and much more. Can you find the black taxi cab in the crowd of cars? Click here to find it.

13) Have you ever experienced any of the following in your taxi?

Being a taxi driver means you are going to see a lot of things from passengers taking drugs and lying to their partners about their whereabouts to marriage proposals and women giving birth. From our results, over half of you have seen a passenger passed out, 23% have seen passengers engaging in sexual activity and almost 46% have overheard a passenger lying about their location. Is there anything you have experienced which isn’t listed?

14) Have you ever done any of the following when working as a taxi driver? 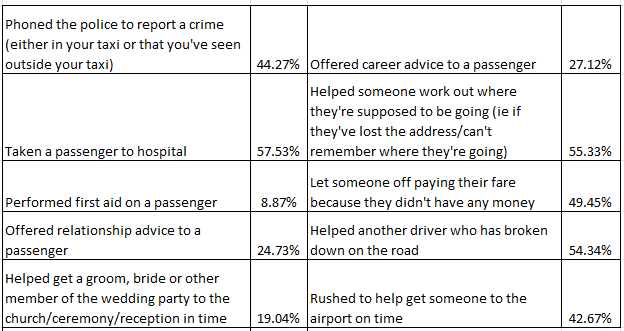 At insureTAXI we are quickly learning that a taxi driver’s days are never the same. On the job, taxi drivers seem to be faced with a number of different scenarios. There were 11.76% drivers from our survey who weren’t faced with any of the following on our list.

15) What is the most common conversation topic for you to have with passengers?

The most popular conversation topic for taxi drivers is about the weather at 30%. This is also one of the UK’s top 3 conversation topics. It seems like we can’t stop talking about the weather. If you’re ever a bit lost about what to tell your passengers, have a look on our region pages! They are filled with great local facts to impress your passengers.

16) What is the most annoying thing a passenger could do in your taxi?

As you can see by far the most annoying thing a passenger could do is vomit (32.40%). This is then followed by being violent or aggressive behaviour (20.44%). Less annoying things include picking up people along the way (0.4%) and not tipping (1.10%).

17) How regularly do you fear for your safety?

18) On average, how much do you get tipped per a fare?

As you can see, by a land slide, almost 40% of taxi drivers receive a tip from 0p-50p. The best tippers according to our taxi drivers are: professional men, men out with their friends and men who are out on the date. It seems like the males like to tip a lot more than the women.

19) What do you think is the biggest threat to your profession?

From our results we have found out that biggest threat to a taxi driver profession at 37% is the costs of being a taxi driver. So this includes insurance, maintenance to their vehicle, fuel, servicing etc. This was followed by competition – general taxi competition at 21% and Uber at 16.75%.

20) Are you worried that leaving the EU will have a negative impact on your job? 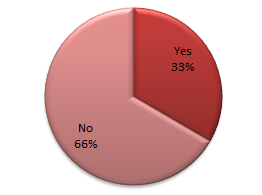 22) Have you ever had a celebrity in the back of your car?

We were a little starstruck when we found out that 53.47% of you have had a celebrity in the back of your taxi! Below are some of the many celebrities that you have taxied around. Some of the other celebrities have been:

23) What is the strangest thing someone has left in the back of your taxi?

At insureTAXI we have discovered that you have had a lot of very uncommon and strange things left behind in your taxi. The main item was sex toys & condom, this was more common than phones, keys and purses! Also with some very unusual items like a baby goat, a baby and false legs and teeth! Have you had anything stranger left behind in your taxi?

24) Tell us about the most surprising, shocking or funniest thing you have ever witnessed in the back of your taxi

This is one of our favourite parts of our survey, hearing your stories! Some were a little bit too rude to share, but we did have a great laugh about them. We have decided to share some of our more “PG” rated favourites…

“A bloke stripped naked and jumped out my taxi and ran up street. His Misses was mortified.”

“A cat had entered my vehicle while I stopped. 2 miles into the journey the customer asked me if I always brought my cat to work.”

“A passenger died on me, not in the taxi at the prearranged pick up time to go to his local. Lost a few hours due to police and paramedic enquires.”

“A girl went to meet her long lost dad, she got out taxi slapped his face called a lot of names got back in taxi and went home.”

“A lovely deaf and mute lady – I helped take her to the door. She paid me and left her baby in the taxi. As I drove off I looked in my mirror and saw her jumping up and down. It was pretty funny.”

“A man chasing another man who was naked. He was caught in bed with his wife whilst on a night shift. “

“A man once tried to get a Shetland pony in the boot of my estate car. … he failed.”

“A passenger got me to park up in a remote car park, had sex with his girlfriend on the bonnet of my car then he asked me to have sex with her. I didn’t – the meter was running and so was the dashcam.”

“A professional cricket player for Somerset shouting abuse at a woman out the window. Only for me to stop at a red light and that woman came over and slapped him.”

“A young lad had a makeover while passed out with the added word ‘t**t’ on his forehead. He was hungover but rushing to meet up with friends back at a nightclub so didn’t check the mirror before going to a cashpoint on his way to the club. I made a point of dropping off right in the middle of all the clubs “

These have been the highlights of our 2016 taxi survey. However if you have anymore information you would like to tell us or would like to know anything else, get in touch with us through our social media! Twitter and Facebook.