Mehmood Sultan, a well-known taxi driver within Bradford has got his big break!

He is starring in the newest major Bollywood movie that was released in early September. Mehmood, who is 64 years old, has been to play the role of a judge in the comedy, Actor In Law.

No doubt his four grandchildren were extremely proud as he promised to take them and the rest of family to see the newest Hollywood box office hit. Mehmood has had many different jobs over the years, however, he believes his calling is within the acting world as he has starred in many other TV series and films. Such as; ITV Police drama DCI Banks and film, Welcome to Karachi that was filmed in various locations around Bradford.

In the newest film that Mehmood has starred in, he has the opportunity to work with some of the biggest names in Bollywood showbiz. With the likes of, Om Puri and complete heart throb, Fahad Mustafa. However, for the moment the new blockbuster is only being shown at Bollywood cinemas. It is likely to be released shortly within the UK and America.

The whole reason for Mehmood’s success within this Bollywood movie is down to the fact that he received a call from his good friend, Nabeel Qureshi, who is a director. During the call, Nabeel invited him over to Karachi for four days of filming. Throughout the whole film, Mehmood stars as a Judge within a court room with the scene lasting around 8 minutes – this is Mehmood’s longest role to date!

Mehmood’s next up and coming role is top secret and he is remaining very quiet about who he is going to play. However, it is going to be an English film that is bound to be a big one! We wish Mehmood all the best and we look forward to seeing him on the big screen!

If you would like any more information on our taxi insurance policies, please do not hesitate to get in contact with us on; 01704 530239. 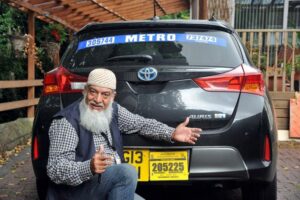